The brave men, living and dead, who struggled here, have consecrated it, far above our poor power to add or detract. The world will little note, nor long remember what we say here, but it can never forget what they did here.” — Abraham Lincoln

Did you know? – Veterans’ Day (originally known as Armistice Day) is a federal holiday in the United States observed annually on November 11, for honoring military veterans, that is, persons who have served in the United States Armed Forces. It coincides with other holidays including Armistice Day and Remembrance Day which are celebrated in other countries that mark the anniversary of the end of World War I. Major hostilities of World War I were formally ended at the 11th hour of the 11th day of the 11th month of 1918, when the Armistice with Germany went into effect. At the urging of major U.S. veteran organizations, Armistice Day was renamed Veterans’ Day in 1954.

“Never was so much owed by so many to so few.” …. Winston Churchill

LIVIA extends its sincere gratitude to all veterans & their families for their dedication and service. 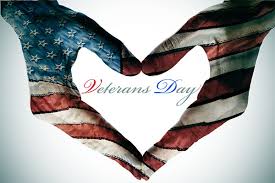